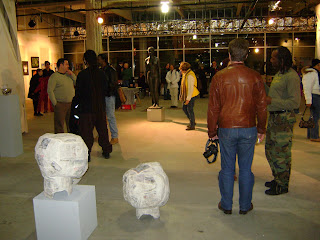 Here is a list of artists who exhibited work in the MOMENTUM show. We will be working on putting up bios and links to all Chen artists. Please let me know if I have forgotten anyone. Right now I have 110 people on the group e-mail list, and there are several new artists who recently signed our MOMENTUM guest book, and I have not added them yet. The size of this group proves that we have a very large community of local artists who want to exhibit their work! Let's keep the MOMENTUM going!

And special thanks to Kiki Nienaber, The Butz's, Yodi, Phillipe, Greg, Rafa, and everyone who helped hang the show, Peter Lewnes, Joe Skrapits, The Antonio Salemme Foundation, Sarah and Matt, Deborah Rabinsky, Sharon Hillman, Joan Gaydos, Jenn Semm, the gallery sitters, Miriam Huertas, Allentown Arts Commission, Fran DiBellis, Rook Jones, The Brew Works, Deli Plaza, The City of Allentown, Joyce Marin, Jay Bickford. And please feel free to add to this list in the comment section. Congrats to everyone on a successful show! It could not have happened without the group effort.
Posted by Angie Villa at 8:48 AM 6 comments: 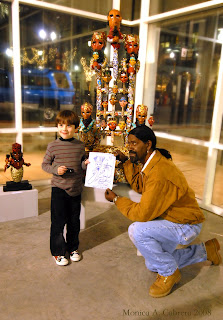 Photo by Monica Cabrera
Posted by Angie Villa at 10:19 AM 7 comments: 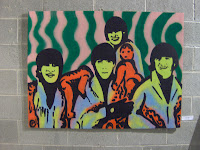 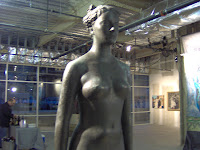 Friday's opening was a huge success and a total blast! Artists mingled with art enthusiasts, enjoyed some wine and a delicious bite from Deli Plaza, the shop owned by artist Mohamed Mansour, which donated trays of yummy treats for the event.

TWO pieces of work sold Friday night - a papier-mache head made by Yodi and a small cow painting by the late Greg Weaver.

On Saturday morning, a quick look at the sign-in book showed 136 people registered Friday night. And there were more people there than that...those are just the ones who chose to sign in!

Here are some images from Opening Night. These photos were taken right before the doors opened, so there are unfortunately no crowd shots. Enjoy! And don't forget, the "Momentum" continues Monday through Friday from 11-2 and closes with a potluck artist party (open to the public) on Saturday from 5-9 pm. Please come and support our local artists! 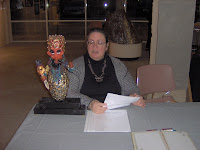 Kathleen and a Mr. Imagination piece work the sign-in table 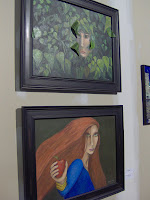 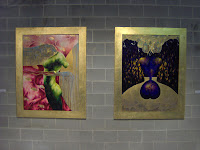 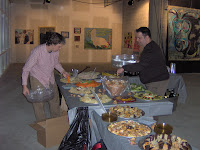 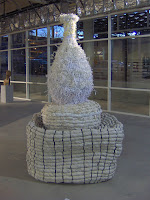 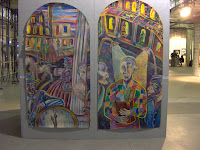 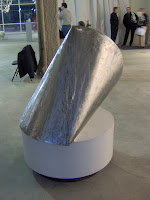 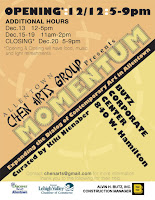 After weeks of tireless volunteer hours, the show is hung and the doors are ready to open for our second show "Momentum." Kiki, Greg and Yodi have been at the Butz space so often in the last couple weeks it seems they must have sleeping bags stowed somewhere. When you get there tonight, you will see all the hard work that they and other Chen volunteers put into making this show incredible.

There's twice as much artwork as last time, and again, all of it high quality and inventive. In fact, some new pieces were made just for this show - as recently as last night!

Also, there's quite a buzz on Hamilton Street. Since the space is a big, glass box, downtown workers and people walking on the street have been able to view the progress and you can feel the excitement and interest building.

Hope to see you all there tonight from 5-9 p.m. Thanks to artist Mohamed and his business, Deli Plaza, for offering to cater tonight's event, and of course, Petey, for bringing wine. As usual, tasteful and tasty refreshments are being accepted prior to opening. It's not too late to donate!

This is from the Morning Call's website. Thanks for the publicity!

Here's the article from the Sunday Morning Call about the upcoming show. The reporter did a very nice job. Hopefully lots of people noticed it and will come to the "gallery" starting Friday!

Of The Morning Call


The Lehigh Valley's newest artist collective is named after its main
meeting place, a Chinese restaurant. The members are as diverse as a
Chinese menu: sophisticates and primitives, landscapists and
abstractionists, a puppeteer and a bottlecap sculptor. Their goal is
to make downtown Allentown as welcoming to area creators as, yes, an
oriental eatery.

The House of Chen Arts Group continues its democratic mission on
Friday, when it opens its second exhibition at the Butz Corporate
Center in Allentown. The show is a Chinese buffet of everything from
Rafael Canizares' architectural ceramics to Mr. Imagination's
mixed-media recyclables. It's curated by Kiki Nienaber, a German-born
art consultant who for 10 years ran a gallery for art, music and
poetry on Manhattan's Lower East Side before it was closed by
gentrification.

''We want to build a momentum with people who see and do things
differently,'' says Nienaber, who owns an Allentown home with her
husband, artist Gregory Coates, another Chen member. ''There's a
general need for inclusion and an outlet. Not just to show
necessarily, but to go to. Not a club but a big old tent.''

The tent poles were staked on the Internet, that virtual-reality
circus. Blogs were run by Angie Villa, a power-pop artist who performs
in the power-pop band the Villas, and Joseph Skrapits, an
impressionist painter who heads the Allentown Arts Commission. They
wrote about filling a void left by the deaths over six years of two
Allentown cultural centers -- Open Space Gallery and Theatre Outlet --
and reaching artists not reached by two active Allentown cultural
centers: the Allentown Art Museum and the Baum School of Art.

Skrapits and Villa began meeting kindred spirits in April at the House
of Chen, a popular restaurant for more than 30 years at Seventh and
Linden streets in Allentown. According to Villa, the Chinese-Malaysian
eatery was chosen because it's accessible, serves good food at
reasonable prices and needed help. As she points out, it started
losing business in 2007 after LANTA replaced bus stops along Hamilton
Street, a city artery, with a new terminal at Sixth and Linden
streets.

Pleased by the dialogue, the Chen members extended it to each other's
studios. The group allowed Villa to bond with old friends like
Rosemary Geseck, her senior art adviser at Moravian College, and new
allies like Coates, a Pollock-Krasner Foundation fellow who paints and
sculpts bicycle inner tubes. The group allowed Skrapits to promote the
commission's strategic plan, also launched in April, to devote more
energy to supporting artists as well as arts organizations.

With no budget to speak of, the Chen members made their first splash
the old-fashioned way: through synergy. They held their first show
over two days in October at the Seventh Street home of Peter Lewnes, a
glass blower who manages the City of Allentown's campaign to give the
garish Seventh Street strip a bit of Main Street's homey charm.
Lewnes' home became a gallery because it's roomy, attractive and, as
part of the Old Allentown House Tour, guaranteed a healthy audience.

Encouraged by the turnout, the Chen members made their second show
more ambitious. They doubled the number of participating artists to
more than 30 and quadrupled the number of days to eight. While not as
cozy as Lewnes' house, the long-vacant space in the Butz Corporate
Center is larger, more centrally located at Ninth and Hamilton streets
and more symbiotic. Next door to the Chen Group's temporary gallery is
the home of the Lehigh Valley Arts Council, which opened last year in
the Lehigh Valley Visitors Center.

Exhibit No. 2 is more historic and symbolic, too. It has works by
Antonio Salemme, the late Williams Township resident best known for a
bronze bust from life of Paul Robeson, and works by Greg Weaver, the
late Allentown resident best known for paintings of melted, lopsided
cows. In the '70s and '80s, a few blocks from the Butz building,
Weaver ran a pair of lively arts lofts, the Valley's hippest
counter-culture communes. 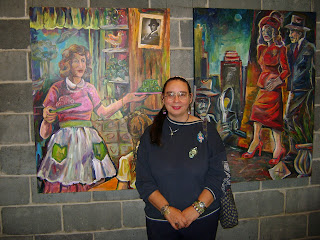 Fellow Chenster Rosemary Geseck was invited to the White House this past Tuesday. She showed me the official invitation from Laura Bush! I hope Barney was nice to her. (Did you hear about the reporter who was bitten by Barney, their dog?) Ro was selected, through the Baum School of Art, (where she teaches) to design and paint a Christmas ball for the White House Christmas tree. The scene she painted includes landmarks from Allentown and Bethlehem. The ball represents the Lehigh Valley. I hope she has some pictures of the ball, I do not recall seeing a story in any newspaper. Please congratulate Ro when you see her at our show.
If anyone can find an online image of the ball, please let me know and I will post it at this blog.
Way to go Ro!
Posted by Angie Villa at 2:10 PM 3 comments:

As of Tuesday, Dec. 2, more than 50 art works by 25 artists have been submitted for 'Momentum' show at the Butz building in Allentown (opening Friday, Dec. 12--check out the flier in the earlier post for details). Kiki and the installation crew will be in the space the rest of this week (beginning around noon each day) so there's still time to drop off work if you want to be involved. The posters and fliers have gone out and Geoff Gehman is doing a piece about the Chen Group for this Sunday's Morning Call.
The space is tough--wall space is tight and lighting is, shall we say, not optimal--but the Chensters are tougher. We have an incredibly imaginative and hard-working team, and solutions seem to be appearing as we need them; today we got a promise of a loan of theatrical lights for the run of the exhibit. Now, if we can just get those 4 20-amp circuits installed...
I know this isn't a Christmas show, but I'm beginning to think of it as "the miracle on Hamilton Street." Five years from now we may look back on it as the art show that changed Allentown.
Posted by joe skrapits at 7:36 PM 3 comments: