Welcome to Allentown Freak Out! 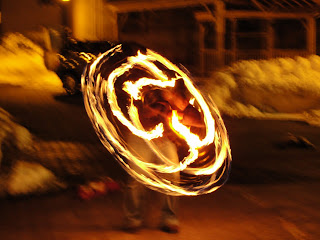 I want to introduce you to a new festival coming to downtown Allentown this summer called Allentown Freak Out. This event is a "fringe festival," which means it will feature avant-garde arts and entertainment. I am one of the excited organizers of this event. There is a committee of people from various backgrounds working to make this festival happen.
Allentown Freak Out will be held June 18-19 mainly along the Hamilton Street corridor from 9th Street to 5th Street. We have participation from Allentown Public Theatre, fire arts performers, Happy Hooper Lehigh Valley, drummers, and more. There will also be a film screening, indie bands, and art exhibits.
Allentown Brew Works, House of Chen, Art-N-Soul Studios, the green at PPL Plaza and Allentown Arts Park are committed to serve as venues.
Even part of the Chen Arts Group will be participating with an art exhibit at the Allentown Arts Park. Thirteen plexiglass cubes designed by various artists will be unveiled in the theme of Re-Urbanization. (This is the project I secured a PPA Project Stream grant for.)
We are looking for sponsorship of this event. Your business can receive an ad in the official festival program for as little as $50. We are also offering individual artist discounts so please get in touch with us at: info@allentownfreakout.com
Pictured above: Fire hooping, one of the opening night performances planned for AFO.

Allentown Public Theatre is holding auditions tomorrow, Saturday 3/27, for a play titled El Coqui. The story is based on Puerto Rican folklore.

from Americans for the Arts:

Arts education advocacy has had an exciting few weeks in Washington! Several times this month leaders in Congress expressed concern and raised questions about the future of arts education with U.S. Education Secretary Arne Duncan.

Secretary Duncan has appeared before several Congressional committees to speak about education funding and federal reform efforts. We need to build on this momentum by raising these concerns in the broader public forum, like your local newspapers.

However, all around the country, including in Pennsylvania, we see arts education being challenged, reduced, and in many cases, being dropped from local school budgets.

In the past few weeks on Capitol Hill:

House Budget Committee Chairman John Spratt (D-SC), based on questions posed by arts education leaders in his congressional district, asked Secretary Duncan about whether the arts were being put on the "backburner."

Senate Education Committee Chairman Tom Harkin (D-IA) said that, "Not every kid's brain is wired for math and science and engineering...some are more artistic, more creative, in music and in the arts..." and questioned Secretary Duncan about how arts education will be supported within the White House's new education "blueprint."

House Appropriations Chairman David Obey (D-WI) during the Secretary's testimony on his FY 2011 budget request brought up his personal interest in music and how providing the arts in schools can help keep students who might drop out otherwise engaged.

Secretary Arne Duncan responded each time that he has consistently heard about the "narrowing of the curriculum" during his trips around the country and how that the Administration is committed to strengthening arts education opportunities in the future.

Americans for the Arts is preparing a major effort this year to support arts education in upcoming education reform initiatives and funding. As part of our outreach timeline, we ask that you take action now by taking two minutes to visit our E-Advocacy Center and send a customizable letter to your local news outlets supporting arts education both in your community and at the federal level.

Next on the calendar is National Arts Advocacy Day in Washington, DC on April 13, where we will be calling on arts education advocates from around the country to contact their members of Congress on these very same issues.

Help us continue this important work by becoming an official member of the Arts Action Fund. If you are not already a member play your part by joining the Arts Action Fund today -- it's free and simple: www.artsactionfund.org
Posted by Chen Arts at 3:50 PM No comments:

Labels: advocacy, americans for the arts

From Citizens for the Arts in Pennsylvania:

House Bill 2279, commonly referred to as the budget bill, is expected to be voted on by the full PA House of Representative next week. In the current version, the line item for Pennsylvania Council on the Arts (PCA) grants is at $10 million. If HB 2279 passes in the current form, it will certainly be changed by members of the Pennsylvania Senate when it goes to the Senate Chamber after the House vote. Last year, the Senate voted to ELIMINATE the line item for arts grants and it could happen again this year. Help us prevent that from happening.

Join your fellow arts advocates at the 2010 PA Arts Advocacy Rally at the State Capitol in Harrisburg on Monday, April 26. It could be our only chance to let the members of the Pennsylvania General Assembly see how important the arts are to our communities, our economy, and to our schools.

Jenny Hershour
Managing Director
Citizens for the Arts in Pennsylvania
jlh@citizensfortheartsinpa.org
717.234.0959
Posted by Chen Arts at 12:25 PM No comments:

Labels: citizens for the arts

I know many of you are interested in having a group show this summer. You may have heard that we are unable to use the community room at the art museum due to the expansion project taking place this year.

Does anyone have any suggestions for a new show location?

Please feel free to start a discussion in the comment section of this post. Moderation is down for the time being to enable the conversation. Thanks.
Posted by Chen Arts at 11:55 AM 28 comments:

We received the unfortunate news that Barba-Del Campbell, one of Allentown's most beloved residents, a true lady and lover of the arts, passed away over the weekend. Here are the details and a lovely photo of Barba-Del by Scott Snyder. 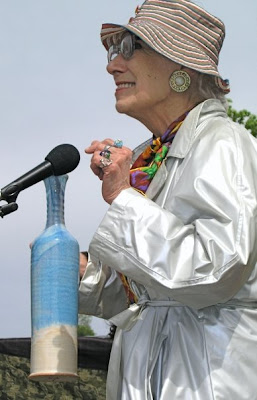 I reget to report the lost of art patron and Valley resident, Barba-Del Campbell. She was born Feburay 9, 1932 and died Saturday March 6, 2010 at Lehigh Valley Hospital, 6:30 am. She was an Icon in the Lehigh Valley.
A memorial service will be held at the House of Chen, 732 W. Hamilton Street, Allentown, Pa, on Saturday, March 20, 2010 from 1-4pm.
She will live on in all of our stories and the history of the Lehigh Valley.
For more info goto Facebook: http://www.facebook.com/yodi.vaden#!/event.php?eid=355853286580&ref=mf

Show at Touchstone, through 4/30 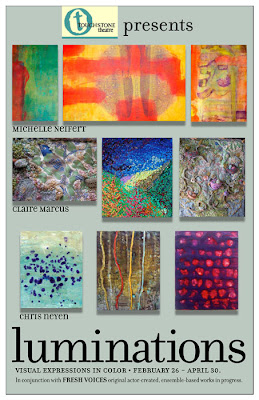 This show features work by Chris Neyen, a Chen group show regular.
Info from Liz Wheeler:
The Touchstone Theatre Gallery is delighted to be showing the work of Claire Marcus, Michelle Neifert, and Chris Neyen (through April 30).
For more info, call 610-867-1689 or visit http://www.touchstone.org/.
Touchstone is located at 321 East 4th St. in south Bethlehem.
Posted by Chen Arts at 1:17 PM 1 comment:

The Sharadin Art Gallery at Kutztown University of Pennsylvania requests proposals from artists, craftspersons, and designers for the production of an original, temporary, site-specific installation for our exhibition space.

The artwork will remain on view from January 28 - March 4, 2011. The selected artist (or artist team) will be awarded $10,000. The award must cover all material and labor costs associated with the production of the work, all travel expense to and from our site, all incidental costs, meals, and all artist fees and honoraria.

The university will provide housing one block from the gallery (Main Street Inn) for one artist -- all remaining housing costs for additional artists and/or support personnel must be covered from the $10,000 award.

A group of Kutztown University students will be available to assist with the physical production of the selected proposal. Application deadline is end-of-business, Friday June 11, 2010

NO PHONE CALLS PLEASE.
Posted by Chen Arts at 2:47 PM No comments:

New event coming in May

This will be an affair for up and coming artists, as well as seasoned professionals, in the Lehigh Valley and beyond, who have an interest in the music and fashion industry.

THE LEHIGH VALLEY MUSIC AND FASHION EXPO will be a community-based event that will involve local residents, merchants, and proprietors, but it will, also, be the genesis of another quality annual event that will make the Lehigh Valley a prime destination.

The goal is to provide the opportunity for all attendees to experience an
informational, educational, and family-oriented event.

Seminars, networking, talent showcases, and fashion shows will abound. In addition, there will be panel discussions, video presentations, and VIP events.

THE LEHIGH VALLEY MUSIC AND FASHION EXPO promises to not only be a grand experience, but the organizers are dedicated to making this affair into an endeavor which would "make an effective change in our communities by doing activities that get the area residents, merchants, and proprietors directly involved in quality, progressive, and positive events".


SPONSORSHIP AND VENDOR OPPORTUNITIES ARE AVAILABLE