In light of the two year anniversary of the Allentown Chen Arts Group, I've been inspired to write my personal reflection of what the group has become and what it has accomplished in that time.

I guess I should give you some background. I am Sarah. The person who sends out the emails, handles correspondence and has coordinated some events. I create documentaries and short films with my husband Matt.

For more than a year now I've been the facilitator for the group, receiving regular emails from artists who want to share their art openings, events and collaboration opportunities with others. I also send out regular email reminders of upcoming meetings and write blog posts on topics that affect local artists and arts groups, such as state funding. I have enjoyed being the group switchboard operator, putting the people in touch with each other.

This is truly a group made up of individuals and I like the way remain unincorporated as an organization. We all have different goals and plans and styles of working. The group really doesn't have a mission or a grand goal, except to enhance the profile of the arts and artists in and around the community, and our numbers give us the strength to do that easier than one person alone.

Of the three group shows this group has pulled off, each one was as different as the locations and the coordinators involved. First, there was 16 & A Movie at Peter Lewnes' 7th Street loft. I think we pulled it off in less than two weeks, with Peter inviting artists in to transform his space into a gallery. The day of the OAPA House Tour, hundreds of people lingered and sipped wine and spoke with the artists. I know I was in awe of the local arts community coming together in a way it never has before through that show.

The next show, twice as many artists responded to the call for work. Greg, Kiki and Yodi spent days inside the Butz Building prepping it as a gallery. Joe and Antonio teamed up to make the electrical work fall into place. Rafa spent the night inside the space crafting an enormous vase out of newsprint. Yodi, always inspired, used hundreds of Chinese newspapers to craft the show's signature namesake piece, "Momentum." Kiki curated the show. The opening in that beautiful glass space was a hit. Hundreds of people stopped by that night. And for the following two weeks, teams of volunteers offered to sit in the gallery for a few hours each afternoon so the downtown residents and workers could come in and enjoy the exhibit.

Our third show, Velocity, at the Community Gallery of the Allentown Art Museum, is the one I coordinated. Not that I selected the pieces, that was done by a panel of artist volunteers. At the time, we were looking for a space to hold another show. Locations seemed lacking. Then I recalled the AAM space. It wasn't as "sexy" as our other locations, but it gave us access to a great audience. The arts enthusiasts that visit the museum daily to view world-renowned work would now be treated to a show by the Chen Arts Group. We had a terrific afternoon opening with a couple hundred guests in attendance.

(As of our most recent meeting - where we celebrated the 2-year anniversary - the group discussed locations for a fourth show. I plan to get in touch with the landlord to see if we can use it this summer. And of course, it would be downtown again.)

Aside from the group shows, there have been excellent individual efforts by people in the group or associated with the group to continue sharing work with the public. Yodi took the initiative to approach the owners of vacant downtown buildings to see if a small group of us could hang some artwork. The initial "Hamilton for Rent" exhibit was at 10th and Hamilton in the former gym. Yodi, Matt-Ryan-Dan, Greg and I created or displayed pieces. The show moved down the street and other artists joined in, like Rosemary Geseck and Chris Neyen. Heather Bush brought some jewelry to display. Eventually Greg Coates took a window in the 800 block, coordinated with the help of Diane Teti who has connections to building owners, and began a rotating display of his work and the work of others. This spurred Diane to move on her "Art Mart" idea and open a gallery/craft shop for the holiday season with the OK from the building owner. Greg coordinated the artists. A group of us got together to clean, polish and vacuum the space. We opened with a great turnout from the public and artists.

The Chen Arts Group is really home to a broad variety of interesting people. Many only turnout when a group show is announced. Others come to dinner religiously every month to hang out with their fellow artists but rarely show their work. Others never come to dinner but coordinate happenings and invite everyone else to participate. Not only does the degree of involvement vary, but the level of artistic training does as well. Some of the artists have exhibited internationally. Others teach. Some are still in school themselves. Or have recently taken a path into the arts and are excited to meet others who can offer support or even mentorship. We are an all-inclusive group. There is no official membership because everyone is welcome to participate at anytime, for as brief or as long as they like. How I got into facilitating I can't really recall. But I enjoy doing my part to raise the profile of the arts in Allentown.

We should all be proud of the Arts Ovation award being given to the group. While I was on vacation I know that Greg, Angie, Marilyn and Heather H. and Jenny Lim (owner of House of Chen) were videotaped for the award acceptance at House of Chen. Each person has a varied perspective on what this group has accomplished. I recall that first blog discussion among several of us who are still active founding members today. It's amazing we've stuck with it.

Stay tuned for a future group show. A location is in the works!

Also, don't forget...13 Chen artists will display their plexiglass cubes at the Arts Park during Allentown Freak Out, June 19.

And, keep your eyes open for the Allentown Chen Arts Group facebook page - coming soon. Stefan, a volunteer and newcomer to the group, has offered to maintain it.

Some of you have asked me for information on the Arts Ovation awards luncheon. Here are the details again: 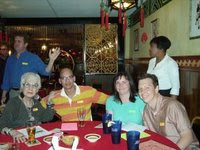 This month marks the 2 year Birthday of the Allentown Chen Arts Group! (or is it Anniversary?) Thanks to all of the artists, supporters, and volunteers who have contributed to the success of this group. We have accomplished a lot in two years, thanks to our talented and dedicated volunteers. Let's keep the ball rolling and continue to produce high quality professional gallery shows and arts events in downtown Allentown.

Congratulations to the group for receiving an Arts Ovation Award from the Allentown Arts Commission. This award is for emerging artist/service to community. There will be an awards luncheon at The Holiday Inn on Hamilton St, May 6th. Tickets are $35.00. Please see The Arts Commission blog (link at sidebar) for more information, or contact Sarah if you are interested in attending. It would be great to see you there, because this award is for all of us. Thanks to the Arts Commission for recognizing our group.

Angie Villa
Posted by Angie Villa at 9:04 AM No comments: