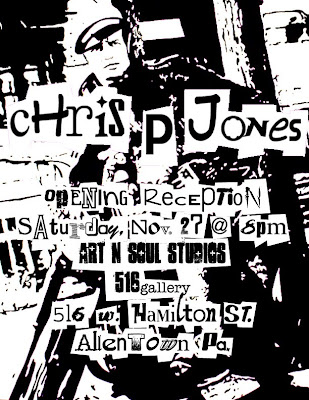 Walking the Edge Location Discussion: Salemme is first choice - most members felt that a place with heat would be best in January (This works out well since it's now at Salemme!)

The group would like to see a calendar of group shows set in advance (would we have this available online as well?)

Group Wish List: Exhibit/Group Show Calendar, Heather's Database of Chen Arts members, Facebook group page (I offered to create this and maintain it for the group, but wanted to ask you your thoughts first.)

Art Museum: The group discussed looking into securing the first available 2011 show in the community space planned in the museum when it opens

Walking the Edge Needs: reception, food, pick up/drop off, hanging committee
Large scale Allentown show: Georgine suggested an Allentown show that we plan in advance which could be open to all of Allentown, possibly contain more controversial work, etc.

Allentown/Easton collaboration: one meeting attendee suggested we collaborate with the Easton arts group to help each other promote shows and maybe do something together between the groups

Chen Arts Meeting attendees showed interest in having at least two shows planned per year, which would be planned out in advance
Posted by Chen Arts at 11:45 AM No comments:

Art Mart, the valley’s premiere artist-operated and locally created holiday shop, is returning to downtown Allentown for the second year. The store officially opens Wednesday, Dec. 1 and will be open during the Downtown Tree Lighting from 4-8 on Dec. 2.

The shop is being graciously hosted at the Holiday Inn at 9th and Hamilton streets and will exclusively feature handmade, original goods by area artists and artisans.

You can find one-of-a-kind gifts such as knitted and crocheted hats and scarves, jewelry, hair accessories, home décor, original art and more. Demos by artists will be held on Saturdays throughout the season.

Art Mart is an independent effort of Diane Teti, Sarah Fulton and Yodi Vaden that strives to support local artists and advance downtown Allentown through its annual holiday store. Special thanks to Cathy Minnich, general manager of Holiday Inn, for hosting the shop for 2010.

Art Mart is returning for the second time! Diane Teti, Yodi Vaden and Sarah Fulton (that's me) are working to bring this locally produced artisan's shop back for the holiday season. And appropriately, the Holiday Inn at 9th and Hamilton Streets has graciously offered to host us.

We are currently looking for artists/artisans/crafters with unique, reasonably priced handmade items to sell in the shop. Please contact me if you are interested in selling items there. We may need to look at a few photos to see what you're planning to sell.

Art Mart is tentatively scheduled to open Black Friday, Nov. 26. We will be open during the Downtown Christmas Tree Lighting Ceremony from 4-7 p.m. (or beyond) Thursday, Dec. 2. Please join us in welcoming the holidays and commit to supporting the local economy buy shoppping for locally handmade, unique, original gifts this season.

Contact: chenarts.info@gmail.com
Posted by Chen Arts at 10:19 AM No comments: 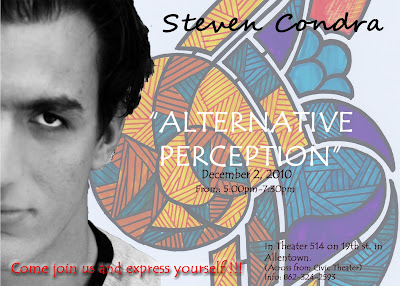 Once again the Allentown arts community is stretching the boundaries of 'normal' with an exciting, debut exhibition of German-born artist and sculptor, Steven Condra - just in time for the Holidays!
Civic Theatre and the new, up-and-coming German-American artist invite all Chen Arts Group
members and their friends to attend the “Alternative Perception” exhibition, which will be Condra's first solo show in the US.
The exhibit will host an engaging sample of Condra's most recent abstract pen & ink work and sculpture at Civic Theatre's "Theatre 514" location on 19th St. from 5 - 7.30pm

With the help of Allentown's West Side Poetry and Word Wednesday poets, the “Alternative Perception” exhibition was created to foster tolerance and acceptance by exposing different views and opinions of Condra's work via the medium of 'Spoken Word'. Poets from the two groups will be bringing his art alive by expressing their thoughts and emotions about the pieces that speak to them the most.

An integral part of Condra's philosophy is giving back to the community in which he now lives, and a percentage of all proceeds from the event will be donated to Civic Theatre.

Come join us on December 2, from 5 - 7.30pm to celebrate an evening of abstract expression and a chance to meet new friends!