The Vagina Monologues in Bethlehem 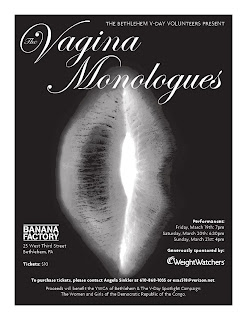 Vagina Monologues at Banana Factory, 25 W. Third St., Bethlehem
Performances:
Friday, March 19th: 7pm
Saturday, March 20th: 6:30pm
Sunday, March 21st: 4pm
Tickets $10
Proceeds benefit the YWCA of Bethlehem and The Women and Girls of the Democratic Republic of the Congo.
To purchase tickets, contact Angela Sinkler at 610-868-1035 or esas518@verizon.net
V-DAY
V-Day is a global movement to stop violence against women and girls. V-Day is a catalyst that promotes creative events to increase awareness, raise money and revitalize the spirit of existing anti-violence organizations. V-Day generates broader attention for the fight to stop violence against women and girls, including rape, battery, incest, female genital mutilation (FGM) and sexual slavery.
MISSION
V-Day is an organized response against violence toward women.
V-Day is a vision: We see a world where women live safely and freely.
V-Day is a demand: Rape, incest, battery, genital mutilation and sexual slavery must end now.
V-Day is a spirit: We believe women should spend their lives creating and thriving rather than surviving or recovering from terrible atrocities.
V-Day is a catalyst: By raising money and consciousness, it will unify and strengthen existing anti-violence efforts. Triggering far-reaching awareness, it will lay the groundwork for new educational, protective, and legislative endeavors throughout the world.
V-Day is a process: We will work as long as it takes. We will not stop until the violence stops.
V-Day is a day. We proclaim Valentine's Day as V-Day, to celebrate women and end the violence.
V-Day is a fierce, wild, unstoppable movement and community. Join us!
5 REASONS FOR MEN TO SUPPORT V-DAY:
Mothers, Daughters, Sisters, Girlfriends, Wives
Posted by Chen Arts at 3:56 PM 1 comment: 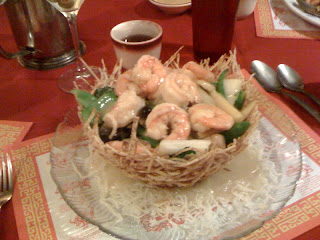 We had decent turnout for the meeting. About 20 of us met for tasty Malaysian dishes and conversation. The photo above (taken by Diane Teti) is of a tasty seafood and veggie dish in a homemade shredded potato bird's nest.
Here's a breakdown of what was announced or took place at the meeting:
Sarah Fulton was officially appointed to the Allentown Arts Commission.
The commission is holding its Arts Ovation Awards in May and the Chen Arts Group will be receiving an award for being an emerging arts organization. Hooray!
Allentown Freak Out - a fringe festival to be held downtown - is set for June 18-20. A committee of artists and business people are partnering to organize and host the events. The festival embraces arts, cultural experiences and performances outside the mainstream - i.e. "on the fringe." Music, film, theatre, fire performers and buskers will be featured. To volunteer, please email info@allentownfreakout.com To donate toward the cause (any amount is greatly appreciated) please email donate@allentownfreakout.com If you want to sponsor an event or an art group, write to sponsors@allentownfreakout.com
Plans for a group show at Allentown Art Museum have been canceled. The community gallery will be closed this summer for the museum's long-awaited expansion. If anyone is able to offer space at a building around downtown Allentown, please contact chenarts.info@gmail.com
Sue Highet is still seeking artwork donations for the Art of Giving silent auction on March 19. The auction raises funds for the Soup Kitchen. The organizers are particularly short on photography and sculpture donations. Please contact Sue if you'd like to donate your work: 610-435-5054
Yoga instructor John Mann is hosting Big Guy Yoga at Allentown Brew Works from 9 am to 4 pm on Feb. 28. Details are forthcoming. See more info at: http://www.thebrewworks.com/events/
Photographer Kate Hughes is performing in the Vagina Monologues at Banana Factory. Show dates and times are: 7 p.m. Mar.19, 6:30 p.m. Mar. 20 and 4 p.m. Mar. 21. All proceeds benefit charity. Details are forthcoming for this event as well.
Last but not least, Chenster and photographer Jim Gallucci was on hand, along with writer Anne Schauer, to take a photo of the group for an Allentown guide being produced by the Chamber of Commerce. The guide will feature the group and House of Chen under a special section titled "Treasures Known & New." The guide will be in circulation this spring. Be sure to keep an eye out for it and all our smiling faces!

Check out this interesting service offered through PS1 and share the details with your friends.
(info sent by way of Greg Coates)
P.S.1 announces the launch of a new Studio Visit website and this
weekend's Saturday Sessions performances.

A website that invites artists and collectives to exhibit their works
online and invites viewers into their studio spaces, Studio Visit
encourages the local and international artist community to participate
in an online artistic pool of information and a research tool for future
exhibitions. For more details PS1.org.

sample of one finished;

http://ps1.org/studio-visit/create-visit
Posted by Chen Arts at 3:09 PM No comments:

DRAWING FROM SCULPTURE
-at-
ATELIER SALEMME

Draw from our unique collection of nudes, portraits and multi-figure compositions by Antonio Salemme, one of America’s foremost 20th-century classical sculptors. 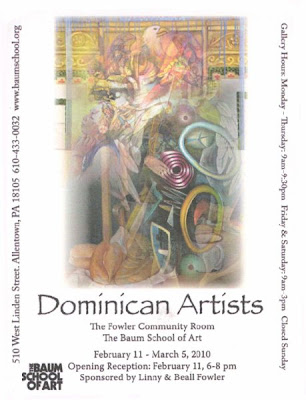 Show opens Feb. 11 from 6 to 8 p.m. at Baum School, 5th and Linden Sts. in Allentown. Please attend and show support for our local artists.
Posted by Chen Arts at 10:12 AM No comments: