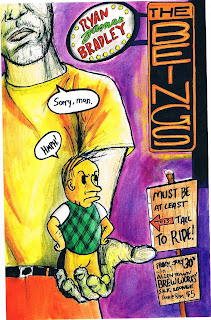 About 15 people attended the meeting on 7/24 at House of Chen. Some newcomers were welcomed. Hopefully we will see their work at a future show.

There were only a couple announcements to be made....

I announced an upcoming fire arts performance titled "In the Heat of the Night" at Union Terrace on August 14 starting at 8:30 p.m. The event will feature at least a dozen East Coast fire performers with poi, staff, hoops, fans, etc. This is an Idea Dome Production. All are welcome. Donations are accepted. Feel free to email me with any questions: chenarts.info@gmail.com

Ellen Kafkalas offered an update on the "Emergence" show. Postcards (featuring a nice, slick design by Chris Neyen) have come in. Ellen handed out stacks for distribution. Please spread the word about this show!

The opening will be held August 7 at 7 p.m. at Salemme Foundation, 542 W. Hamilton Street, second floor. About 28 artists are currently signed up to exhibit their work. The show will continue Monday-Friday from 11-2 until the closing at 7 p.m. on Saturday, August 21.
Posted by Chen Arts at 12:25 PM No comments:

Labels: art show, emergence, fire, in the heat of the night

Art in a Storefront for One Night Only!

What: The Glocal Cafe and Artist Lounge

Details: This is a pop-up store, or midnight gallery, for one night only. Enjoy live music by The Jubilee Family Band and Masculine/Feminine. Plus share your art, enjoy the art of others, join in a community mural...there will be coffee, baking, open mic, conversation and more.

Cost: Donations only.
This is a BYOB event.
Posted by Chen Arts at 2:10 PM No comments:

Opening Reception this weekend at Art-N-Soul 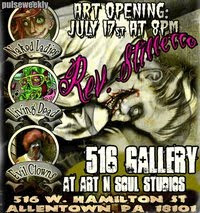 Saturday July 17
Opening Reception: The Art of Jason Lynn aka Johnny Stilleto.
http://www.houseofmadnessstudios.com/
at 516 Gallery. 8-11pm Refreshments served.Art N Soul Studios, 516 W. Hamilton St., Allentown. 610-433-4850
"Rev Stilletto is the pen name of world infamous graphic designer and tattoo artist Jason Lynn. Left an orphan at age 3 from an ill fated plane crash and raised by wolves in the cold hills of Siberia. At age 13 he was mistaken as one of his wolf brethren and was wounded by russian poachers and left for dead. Now, unable to hunt and fend for himself the wolf pack shunned him and he was banished to america...land of capitalism where he became a graphic designer. But the market is saturated, this land of opportunity lied to him, with his tail tucked between his legs he fled back to the motherland, where he was imprisoned for prostitution. But this cloud has a silver lining, inside the harsh prison environment of Russia, he learned the fine art of tattooing. Once his 25 year sentence was up, he moved back to The United States where he opened a tattoo studio, The House Of Madness & Ill Humors, in rural Hampstead, MD where he works still to this day. true story."
Posted by Chen Arts at 3:33 PM No comments:

Sorry it's taken me a couple weeks to get around to posting the photos of the Chen Artists' Cubes. Between the Allentown Freak Out and some much-needed vacation time this post was delayed.
Please take a look at the Cubes as they were displayed in the Arts Park on June 19. The cubes are now on display in the Community Room at Baum School of Art, 5th and Linden Streets - through July 8.
Thank you to Kiki Nienaber & Greg Coates for designing the display of the Cubes and thank you to Rudy Ackerman and the Baum School for displaying them for us. This project was funded with a PPA Project Stream Grant from 2009.
Sarah 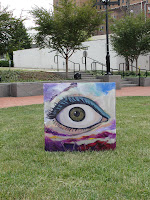 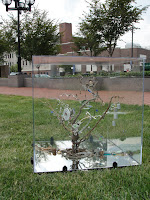 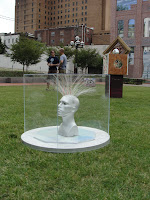 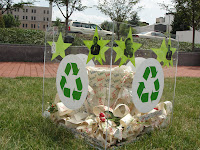 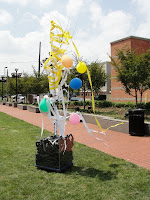 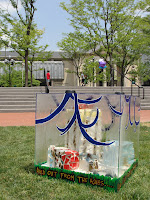 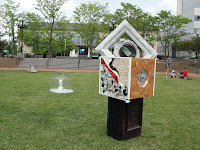 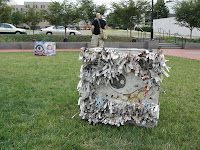 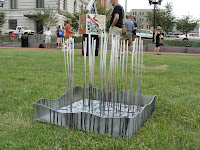 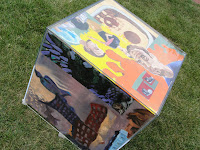 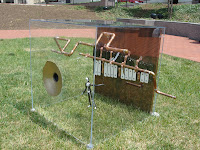 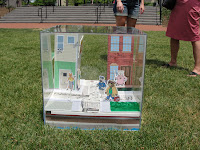 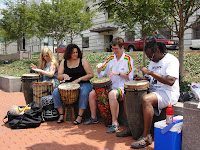 Yodi leads the drum circle
Posted by Chen Arts at 4:38 PM No comments:

Notes from the June 26th Meeting

Below are the notes kept by Ellen at the last group meeting:

On Saturday, June 26, a small, but lively group met at House of Chen for our monthlymeeting. We welcomed some new members into the group. Jacqueline Meyerson,a pastel artist from Macungie and her husband Allen, a musician joined the group.Along with a newcomer to the valley Fauleyibi Tunji who brought some of his pieces toshow us—beautiful wood cuttings, silk screens and paintings. Also, Tony Dong of GDProductions attended his first meeting. Others in attendance were Heather Haas andher husband, Tracey and Rafael Lopez, Cathy Botch, Rosemary Gesek and Ellen AnnKafkalas.

Tony Dong brought up the proposed Arts Center on 7th Street that will be a joint venturebetween GD Productions, The Allentown Public Theatre and the Chen Arts Group. TheCenter will house two theatre spaces, a proscenium and three quarter stage, a café,gallery space and offices.Tony also brought up the upcoming 24-Hour Festival, August 13-14, where writers,directors, producers and actors will have 24 hours to create and perform a play. Therewill be salsa dancing, a drum circle, staged readings, painting workshops and anopportunity for artists to sell their work. Tony Dong will be sending Sarah the informationshortly to distribute to the group. You can also read a bit more about the project on theirwebsite http://www.gdproductions.tk/

The upcoming Emergence show was discussed. A sheet for volunteers to man thegallery hours, along with a sheet for people to man the drop-off dates was passedaround. Artwork can be dropped off either Saturday, July 31st or Sunday, August 1stbetween the hours of 11 am – 4 pm. An email with all the details will go out to thoseparticipating a couple weeks before the show. The idea of a closing night reception, aswell as an opening night reception was brought up as several of the artists participatingwon’t be able to attend the opening night. The closing night reception was tabled untilwe know what kind of monies we have. The question of advertising arose. Chris Neyenis designing a poster that we’re hoping the City will print for free again as they have inthe past, Sarah is checking on that. We’re also hoping to have his design printed as apostcard that can be put out various places, and a digital image that can be posted onartist’s websites and email. Tony Dong said he would post it on their website.

Tracey Lopez asked if anyone was interested in participating in an Altered Book projectfor the upcoming show. It would be on display as one of the pieces. She is distributingone 8-1/2x11 chipboard to anyone interested. The page could be related to "Emergence"or not in whatever medium the artist chooses. An email request to distribute to the wholeChenarts Group will be sent to Sarah for distribution. Those participating would just bringtheir board to the next Chenarts meeting on July 17th, or send them back to Tracey.

Fauleyibi Tunji volunteered to do a Facebook page for the group, so artists could keep intouch with each other.The group adjourned. The next meeting will be held on Saturday, July 17 to coincidewith Malaysian night so expect some great treats.

**Note - due to a scheduling conflict with our host location the group meeting for July will be held on the 24th at 6:30 pm at House of Chen, 732 Hamilton St., Allentown.
Posted by Chen Arts at 10:46 AM No comments: